So many wonderful books have come out during this time of pandemic. There have been heroic efforts to salvage book tours and help get the word out, most notably by Caroline Leavitt and Jenna Blum’s A Mighty Blaze. I’m doing my own small effort to lift up some of my historical novelist friends whose books have recently come out—in particular those who don’t have massive publishing might behind them because they’re either with a small press or indie published.

The first one I have for you is the lovely Donna Russo Morin, whose novel Gilded Dreams was just published. Donna is a prolific historical novelist whose books are beloved by those who enjoy well-researched books featuring strong women protagonists.

I had a chat with her about her latest, the second in her series of novels about Newport, RI in the gilded age.

What drew you to this topic/time/place?

As a native Rhode Islander, my love of Newport–its glitz and glamor and significant history dating back to the Revolution–began as soon as I attained my driver’s license and started spending so much time there. My last ‘working-for-someone-else’ job was actually located in Newport. At the same time, I was conducting research into my own family history and I discovered that my paternal grandfather (I am the granddaughter of four Italian immigrants), who was a violin/viola player and maker with his greatest viola in the Smithsonian Institute, once played for the rich and (in)famous in Newport. That was when the kernel of my first Newport book, Gilded Summers, began to grow.

This is the second book in a series. How does it differ in focus from the first? Are you planning a third?

I never intended to write a sequel to Gilded Summers, but the often expressed desire for it from my readers made me consider it. In order for me to write any book, I must have a historical event that I am passionate about to wrap the story around. In the case of this book, it had to be an event that was a logical extension of the lives of Pearl and Ginevra. The 100th Anniversary of the passage of the 19th Amendment cried out to me for its historical significance. This book, at its core, is a celebration of that anniversary; it is a call for every woman to don the colors of gold, white, and purple on August 18, 2020, and celebrate the achievement made on that day one hundred years ago…a day of great achievement in women’s history, in American history. I wrote this book with the distinct intent to publish it in the year that marks the 100th Anniversary of the 19th Amendment which gave American women the right to vote. I stridently believe the topic of this book is an important one that all American women should be made aware of.

I think the major difference between this book and the first is in the confidence of Pearl and Ginevra and that their ‘fight’ has expanded to one that is not just about themselves, but all women. Their education and their journey have led them to greater social consciousness and they’re not afraid of putting their still courageous spirits at work for this cause. It is also a deeper delve into the lives of these two women and what they experienced in the eight years covered in this book…from the sinking of the Titanic and WW1 as well as suffrage. These are very real adult challenges women of the early 20th century encountered.

As for a third book…without giving anything away, the story of Pearl and Ginevra has come to an end in this book. But it may not be my last ‘Newport’ book. Hint, hint. 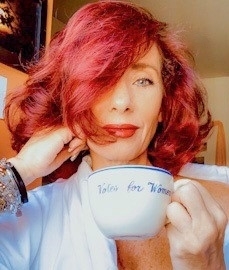 Women’s suffrage is such an important topic. What do you hope your book adds to the conversation or illuminates about the struggle for women voting in the U.S.?

The most popular stories on women’s suffrage tend to center on English suffragettes; they were more aggressive, more violent. As a result, what the American women went through has been superseded for the most part by the English story. But what I found during the research phase of writing this book astounded me. Though not as violent, in fact very ‘polite’ in their efforts, American suffragettes suffered greatly…mass arrests, torture, and more (especially on ‘The Night of Terror’, which is discussed in the book). Through Pearl and Ginevra, we get to experience the American suffrage movement on a very personal level while still encountering the national experience as well. I think it’s profoundly important that American women become more educated about what our foremothers did for us, suffered for us, and to not take their sacrifice lightly. I’m also absolutely gobsmacked that this information is not taught in schools, in American history classes. If I can inform women of how many suffered for our right to cast a vote, I’ll feel I’ve done the women of the past a service, giving them the due they deserve.

If you could leave readers with any thought after reading your book, what would it be?

I sincerely hope that, in learning what American women endured to gain us the right to vote just 100 hundred years ago, more women will take that right seriously…to exercise that right thoughtfully and to their own desires for whom they (not their fathers, husbands, boyfriends) want to lead our government, on the town, state, and federal level. There are more women than men who are registered to vote. The power is in our hands and we are more likely to reach them out across the table and find what is truly best for all. As we stand on the shoulders of the women depicted in Gilded Dreams, let us become worthy for the women who follow in our footsteps to stand on ours.

Thank you so much, Donna!

You’ll find GILDED DREAMS on Amazon in paperback and eBook!