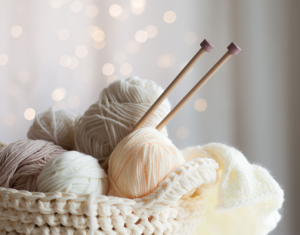 I had to throw so much yarn away before I moved, thanks to the moths. Alpacas and merinos that would have felt soft and warm as they slipped through my fingers and grew row by row into something, anything. Blues and grays and purples, rich with possibilities. I tried to save what was left, pulling apart the strands to get to where the bugs had stopped chewing.

No use. The yarn was so weak, a gentle tug would break it. I think I cried. Or maybe not. I saved myself some work.

And then I notice that part of a throw dangles from one set of plastic needles, heavy enough to bow them slightly. I remember doing that. I can feel it in my hands. The comfort of it.

It’s not too late to pick up where I left off. Something, at least, could be the same.

I dig through my leftover yarn and soon discover I don’t have enough of the right kind. All that work, teasing me. Taunting me. I can’t finish.

Not finish, but unravel. Slide it off the needle and pull and wind into neat, virgin balls.

I can probably get enough yarn out of it to make a scarf. Scarves are easy. Finite. A short story instead of a novel.

But do I still know how to knit? That double cast-on I used to do, and then the continental style that’s quicker and easier on the shoulder?

Ugh. I feel like a lobster working with seaweed and give up after two rows. What’s the point of this now? I don’t need a scarf. My children and grandchildren don’t need scarves.

And a scarf is too easy so I change my mind. I don’t want easy. If I knit, it has to be remarkable, gorgeous, friends need to look at it and say, “I didn’t know you could do that!”

And I’d say, “I taught myself.” Just like I’ve been teaching myself how to have a new life, and it, too, looks amazing to people who say, “How did you manage to do this?”

Like the scarf, I make it up as I go.

Like everything I’ve had to do since then, I pick up the needles and try again.

I can make something new out of something old. Old words, old stories, old songs. Old yarn.

Near where I live a yarn store just opened. I go there and gaze at the color-clumped skeins, imagining them worked into garments. And yet, they’re perfect as they are, pure potential. I somehow feel nothing they could be made into would improve them. Too much likelihood of mistakes, of bad decisions. Projects abandoned, perhaps to be eaten by moths.

But somehow it stirs something in me. A gauntlet thrown. All those colors and textures are saying, make me. Change me.

Round 2: Purl one below. Knit one.

Do I dare? I took a risk coming here. I take risks every time I walk, and that doesn’t always work out. But there are others to think of. If I make something for them, will it absolve me?

I pause to wonder why I think I need absolution.

And then I buy the yarn and the circular needle and the pattern. It’s all right, I think. It’s a gift.

Before, though, I go to a knitting circle and meet three women. Yarn is the only common thread among us, so it’s awkward at first. The others are good friends, speaking a language coded with past experiences I don’t share. I’m the outsider. I listen, I knit.

By the end, they’ve opened themselves to me and I squeeze in, a little. We’re all different, but we’re makers. My knitting loosens and flows, bit by bit. I claw back some of that willingness to take a chance on an idea that might not work out. Something I might have to unravel and start over.

However fleeting, though, that bit of effort will have existed, a brave essay into the unfamiliar. Its imprint will be on my world, another memory that can’t be lost. And so I