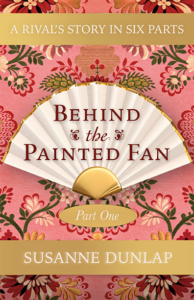 The peculiar thing about writing a book is that sometimes you don’t know where the idea for it came from. Other times you can trace it exactly to something you saw, heard, read, researched, etc. But whatever spawned the idea, something about it made you feel as if you had to write it, had to get the story out of your head and onto the page, and would do anything to make that happen.

And when it does, that book keeps asserting itself, not letting you ignore it and go on to the next thing until you’ve given it its due.

That’s what happened with me and my Behind the Painted Fan novellas. I know precisely where the idea came from, because a lot of it was already written and excised from my most recent published novel, The Portraitist. I’ve told that story elsewhere, that I started the process writing about my protagonist’s rival, then about three women artists working in Paris at the same time, then finally about the underdog.

But the truth is, I had unfinished business with the artist who really inspired all of this work, starting in about 2015. Elisabeth Vigée Le Brun kept knocking insistently on my brain, uttering discreet (or not so discreet) ahems as I tried to move forward with my writing and get to the next project. (Because goddess forbid I’m ever not working on a book!)

It’s Finally, I said, “Okay, okay! You can have your story!”

And so I dug out all the bits I’d written over the years and pulled them together to see where I was.

I was in a mess. A 97,000-word mess. And poor Elisabeth! She was a bit hollow and unformed, cast only in a light in relation to Adélaïde (protagonist of The Portraitist), and I hadn’t really dug into how she might have felt, what was going on with her in her very different life. In short, I’d abandoned her.

No wonder she kept impinging on my notice. Yet I didn’t want to just produce another book. It felt weird to do that so soon on the heels of The Portraitist. But I had to do something, because Elisabeth wouldn’t let me go. I had another book I wanted to write on a completely different story, and I couldn’t, because Elisabeth was still there, forcing her way into my mind and heart.

So I finally gave in, realizing that if I didn’t, Elisabeth would haunt me. Still, another book felt wrong. And when I started the rewriting and revising, I noticed that Elisabeth’s story divided pretty easily into six parts. I’d never done a story in parts before, but I figured I might as well try. That’s the thing about self-publishing. You can try things at relatively little expense. A cover design, proofreading—I have Vellum and I can distribute an e-book through Draft2Digital and get it on all the different platforms.

There was freedom in that decision. Something about breaking the story into parts unlocked me. I thought, a 50-page novella—that’s not scary. It’s not such a commitment. I’m not really writing another 300-page book.

Except it was, exactly like that. Not writing, but rewriting. A great deal more than editing.

I’m not sorry I did it, though. Because now I can move on.

The first three parts are currently available to members of my community for free. The rest are coming soon. They will all be available I hope by the end of the year, either free to my list or to purchase as eBooks for $1.99 each.

Here’s the thing: now that I’ve given Elisabeth her due and am only in the final proofreading and production stages, as I said, my brain is at last free to move on. And that’s what I’m doing. I’m moving on to a story that’s also been plaguing me, that I started thinking about and noodling with about three years ago. That’s the story I’m trying to make progress on during NaNoWriMo, and that I’m working on with a fellow coach.

It’s also the story I’m going to let readers witness as it grows, as it blossoms in my head and on the page. If you’re interested, I will soon be launching a platform where I share my process in its painstaking glory. I mean, I’ll share the thinking and the process, I won’t make you watch as I type words on the screen, LOL! It will just be an open, vulnerable peek into how I work—which is similar to how I work with my coaching clients.

I’ve got some planning ahead of me before that’s ready for primetime, but I’m kind of excited about doing this. It will also act as an accountability exercise for me to get my new book drafted.

Because one thing is certain: I have to write this book. It will knock against my consciousness until it’s done, it will pinch me if my mind wanders, it will trip me if I try to walk by it.

Okay, okay! I hear you! Going to write now.

Three novellas from Behind the Painted Fan are now available to members of my community to read for free right now!

The free stuff is all well and good, but I also share book recommendations, writing tips, and more. So join us today!