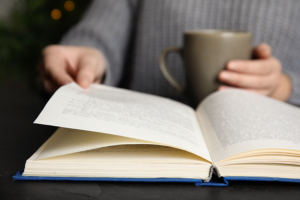 I moved into an apartment in an old mill building in Biddeford, Maine in February of this year. Although I have a daughter, grandsons, and a brother and his family who live in Portland (twenty minutes away), I knew no one in this town.

I stayed in touch, of course, with my friends in Northampton, MA, where I had lived for 34 years, and had book-coaching clients all over the US whom I met with over Zoom. But when I went out for walks in town, I saw no familiar faces. People were friendly, but especially in the winter time, the world was closed down, insular.

This suited me in a way, as I was nursing my profound grief. But I didn’t have the luxury of being able to shut myself away and live in my own world. I needed to keep making efforts to grow my business as a book coach.

Books brought me my first friend in Biddeford.

Almost as soon as I finished unpacking and shelving my (probably) 1200 books, I joined the Macarthur Library and the Biddeford Historical Society. Hardly surprising steps for a writer of historical fiction.

From the latter organization I bought a handsome tote bag—not because I really needed one, but to support them. I was surprised when one of the board members contacted me via email and said that instead of charging me for shipping, she’d be delighted to drop it off for me. Of course, I agreed. She came, I invited her in, and in glancing around my bookshelves she spotted a book she’d read: Anastasia’s Secret, one of mine.

The rest, as they say, is history.

Too many books brought me even more friends and acquaintances.

I was still unpacking boxes in my storage room until June, I think. What I found was that I had dozens of copies of my own books, most that had been sent to me by publishers years before, and I had no use for them. I contemplated recycling them, but the thought just hurt my heart.

So instead, I donated a set to the library and to my favorite cafe and bookstore, Elements.

But I was still left with way too many copies. So I boxed up all but 6 of each, figuring that would be enough for future gifts and giveaways, and contacted my building manager. I asked if I could put the books out somewhere and invite other residents to take whatever they liked. (Note: there are 147 units in my building, so I figured there were bound to be a few readers there.)

She said yes. And it took about a month, but every last book was adopted by someone. And suddenly I was “the author” in the building. People started talking to me and connecting—we had something to say to each other.

And then, the book club sealed the deal.

Last month, eight months after I moved in, I received an email that a resident was starting a book club. I tend not to participate in book clubs as a reader because my TBR pile is already unmanageably big. But the book for the first meeting was one I’d already read.

That led to a lively discussion among seven women—only one of whom I’d met before—of Lori Gottlieb’s fabulous memoir, Maybe You Should Talk to Someone.

Suddenly, my circle of acquaintances in the building pretty much doubled, and not in a casual, “How’s it going?” kind of way.

My life pretty much revolves around books—and I just shared the data to prove it!

But it all means so much more than how books affected my own life.

Wherever there are books, there are connections. I mentioned my favorite cafe above.

They now know me.

I see people on the street in my small town, and there’s more than a little chance that I’ll know them enough to say hello.

I’m very much a newbie here, but the connections I’ve made through books (and I haven’t even listed all of them here) have helped me feel integrated and comfortable, part of a real community.

Reading together, talking about reading and writing, touches something deep in us. Books are never the same for every reader. The text becomes a medium for understanding how people receive information, react to emotions, are moved or not. It’s truly magical.

I have a stack of books I’ve recently read that I’m dying to talk about with others who have read them, and now, I may have that opportunity—and in my own building. But first, I have to read the books they want to read and really think about them. I have to stay open to reading outside my comfort zone.

Because making real connections means being open to new experiences. Or in this case, new worlds between the covers of a book.

Do you have a book group?

I love to talk to people who have read my books. I always learn something! I’m available to come to a meeting via Zoom, or in person if you’re local.

You can download the reading group guide for The Portraitist at the link to the right, and reach out to me via the form at the other button if you’re interested in having me come to one of your meetings.

Download THE PORTRAITIST Book Club Kit
Ask me about talking to your book club!