The first two volumes of my trilogy, The Orphans of Tolosa, came out within a year of each other in 2019. My original plan was to publish the final volume, Voices in the Mist, in 2020. That turned out to be wishful thinking. I had no idea of the long road I would have to travel before I could do that.

The good news is that Voices in the Mist will be available on September 21 of this year. Wisdom is that one shouldn’t make readers wait so long. But I can do nothing about that, except give my readers a little insight about why the delay.

Every author knows that writing a book can lead to unexpected twists and turns. 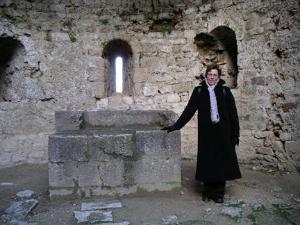 The Orphans of Tolosa is my first trilogy—and it may be my last. The stories that make up the first two books of the trilogy started out as a single, long book. I submitted The Heretic’s Song to my editor at Touchstone Books as my option book, after the publication of Émilie’s Voice in 2005, naively thinking she would buy it. If I was excited about it, she would be too.

I knew I wanted to write about the women troubadours in Languedoc, so much so that I traveled to the region with my partner in the dead of winter in 2004. There were great stories waiting to be told

I fell in love with the whole idea even more after visiting that unique part of France and clambering up steep, rocky paths to explore the ruins of twelfth- and thirteenth-century Cathar castles. I still look for wines from the Minervois, Corbieres, and Languedoc regions. And I have fond memories of eating mouth-watering cassoulet in Albi—the city that gave its name to the Albigensian Crusades.

That was the beginning of the road for me. After that, the twists and turns started.

Voices in the Mist wasn’t even a glimmer in my eye until 2015.

That’s right, I hadn’t even thought of writing Voices in the Mist until ten years after my editor declined The Heretic’s Song. No one (she said, and was probably right) had ever heard of the Albigensian Crusades, and there were no marquee names in the book.

But that story stayed with me and refused to be relegated to a proverbial desk drawer. I’d pull it out every so often, read it, and think about it. My then agent grew tired of hearing me say, “What about Heretic?” whenever I was thinking of embarking on a new project. He always had the same reaction as my editor had.

A few years after the publishing world went pear-shaped somewhere around 2012 and modest, mid-list authors like me found themselves out in the cold again, my agent and I parted ways. He had to make a living, and publishers weren’t buying what I was writing.

So what did I do? You guessed it. I dusted off Heretic and took a long hard look at it. Having grown as a writer over the years, I saw that it was too long, needed editing and revising, and should be split into two books. But two books does not a trilogy make.

I had to come up with another volume to make The Orphans of Tolosa a trilogy.

The problem was that the story in the first two volumes had a very clear end and did not invite a continuation. However, the background of the orphans, the events that led to them being sent away from Toulouse to be safe from the inquisition, called to me.

Basically, for the third volume I had no existing manuscript to revise. I had to write something completely new. Not only that, but it would have to resonate with the other two volumes and intertwine the stories in a way that would be satisfying to readers of the first two volumes.

A long road to the end, but despite it all, I found my way.

I will readily confess that I made major revisions and rewrote Voices in the Mist several times. I added a point-of-view character about seven months ago. I massaged, and rethought, and pulled out my hair over this third volume before I was ready to let it go. 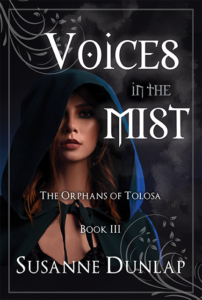 And ultimately, I think I did it. It remains to be seen what readers will say, of course. In the end, I’m glad I set myself this challenge. I have greater respect for writers who write trilogies, who keep stories growing and evolving over multiple volumes.

I write all this to share that, even after ten published novels, it doesn’t get easier. Each new manuscript is the start of a journey that could be relatively short (for me, that means about a year), or very, very long.

Voices in the Mist was seven years in the making. I hope readers enjoy getting to know what happened before—and after—the first two volumes.