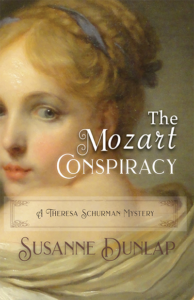 There’s no denying the appeal to readers of a series or a trilogy. When I think about it, I realize that I truly fell in love with reading because of a series—Nancy Drew, of course! As a young reader, I loved getting to know Nancy and her friends, watching her get into adventures, solve mysteries, and live to fight another day. I felt as though I knew Nancy. she was my friend. I even wrote a letter to Carolyn Keene  asking when the next Nancy Drew mystery was coming out. Little did I know there was no such person.

I actually tried to write a mystery myself, but I soon gave up. Even then I understood that crafting a story of more than a page took a great deal of skill. I like to think I was smart enough to understand that I did not possess that skill. At least, not then.

Breaking into the world of series

Until this year, all my historical novels have been stand-alones. That was partly happenstance, partly that at the time, my editors weren’t so interested in series. I’m not certain what changed, but this year, as I launch into a new publishing model, writing several books that go together somehow seemed not just right, but inevitable.

First, there’s my much-beloved trilogy, The Orphans of Tolosa. These three books have been growing in my mind ever since I first drafted a version nearly fifteen years ago. To me, they’re a seamless unit.

Also, I’ve resurrected my original idea of writing a series of YA historical mysteries with the basic cast of characters from my first YA historical novel set in 18th-century Vienna, The Musician’s Daughter. They are the Theresa Schurman Mysteries, and the second will be out on October 15, 2019. It’s called The Mozart Conspiracy.

However, I’ve bumped into some tricky things about writing connected books that aren’t all published at the same time. I’m not sure I would have thought about these things if I hadn’t embarked on this project. After all, I read The Hunger Games trilogy in one go, eagerly devouring them one after another on my mobile phone. There was no time to forget what had happened, who the characters were, between books.

Living is learning, so they say. And I’ve been living up to that adage. Here are a few of the things I’ve learned this year that I wouldn’t have learned if I were writing one-off novels instead of a trilogy and a series:

There are lots more factors to consider when you’re writing books that are connected to each other in some way. I just happen to have bumped up against some obvious ones as I’m doing both a trilogy and a series at the same time.

I hope you’ll see for yourself if I’ve managed to follow my own advice! Book 2 of the trilogy, The Spirit of Fire, will be published by Bellastoria Press on December 6, 2019. The second book in my YA historical mystery series is coming out on Amazon.com on October 15, 2019. It’s called The Mozart Conspiracy, and if you enjoyed The Musician’s Daughter (or even if you haven’t read it yet) I hope you’ll give it a whirl!