On finishing a draft 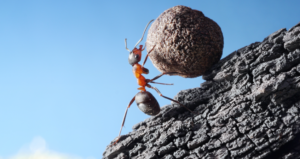 It’s 6:39am. I’m at my laptop in perfect writing position, just as I’ve been every morning since November 1 (that’s 55 days) as I struggled to put together my first draft of this new WIP. I realized at about 2pm yesterday that I’d actually done it. I got from the beginning to the end of my story (at least, I think I did—but more about that later), managed to connect events and figure out a maddeningly vague sequence of historical facts, and create at least a narrative, if not an actual, breathing story.

I’m at my laptop, and I’m itching. ITCHING to go back in and see what I have. I want to look at it, start at the beginning and fill in all the holes I know are there, fix the inconsistencies, make characters more round and real, make settings come to life, and so on. I’m trying not to let myself do it. Why?

All the wisdom is that a writer needs to put a little time between the drafting and the editing process in order to be able to see the work objectively. I don’t dispute that. But I’ve never been good at delayed gratification, I confess. If my laptop is misbehaving and driving me nuts, rather than do without it for a week or two and see if it can be fixed to my satisfaction, I buy a new one. That’s a failing, I confess it openly and honestly.

But is it wrong to be a little impatient? Especially as I grow older and time passes in an accelerating rush toward I don’t know what. OK, that’s a little melodramatic: I don’t seriously worry that I will perish before I can edit this manuscript. Yet there’s something in that. There’s a truth to the sense that we don’t have unlimited opportunities to create, to make something that might be worth having. I’m aware of all the failures of the past, of when I haven’t been able to get it right, or take the next step, and all the years that passed not getting to an end that’s worthwhile, and they hang over me and interfere with my peace of mind.

I’m also fully aware that these are measurements and goals I impose on myself. Other people—many people—are able to be content with where they are, to get to a place after years of struggle and effort and breathe, realize they don’t have to push anymore, they can just coast along, enjoying their grandchildren if they’re fortunate enough to have any, or enjoying well-earned leisure if they’re free from the burden of family responsibilities. (I’m fully aware that these are both ideal scenarios that are unreachable by many, many people, as they struggle with illness, or grief, or poverty. But that’s an entirely different subject.)

Accomplishment is a strange notion. It’s a continuum that can span a lifetime, or five seconds. Seeking it can be fulfilling and exciting, or feel like a millstone that prevents happiness. On paper, I’ve accomplished a lot: Six published novels, a PhD from Yale, a decent career in advertising in London and New York. It’s more than many, less than many if one’s measuring. By all accounts, I should not feel restless, or unfulfilled, or as if there is something yet for me to do. I should be grateful for my health and for my continuing ability to earn a living, for having a roof over my head and a partner whom I love.

But I do feel restless and unfulfilled. My novels haven’t been good enough, or sold well enough. I never had the career teaching music history at college level that I at least thought I wanted more than anything. I’ve made decisions that have left me pretty much without any savings as I approach retirement age.

Many wise people would say that letting go of the idea that I should accomplish anything more, the idea that it isn’t enough just to get from one day to the next as a decent human being, is something I should strive for. (There, you see? I can’t help putting even transcendence into the language of effort!)

So now, the irony is that I actually feel a little guilty for having that aching, unfulfilled yearning where my writing is concerned. I have to do it, and no doubt will until I am physically or mentally no longer able. Is this a positive or a negative thing? Where does the notion of constant failure driving me forward end, and the belief in my own potential begin? Is it humility or is it arrogance to assume I have more to give to the world, even if no one ever reads it?

I struggle with these thoughts every single day. I can’t imagine not doing so.

And so, yes: I will not wait a month before going back and editing my manuscript. In fact, I’m probably going to start right now.