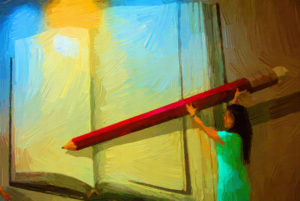 I thought about just leaving it at that. You all know exactly what I’m talking about, don’t you? It goes hand-in-hand with wanting validation, feeling unappreciated, and that pesky cousin: imposter syndrome.

It’s especially powerful for me when I have a manuscript out on submission, as I do now. She hates it. It’s crap. How did I ever think anyone would care about my characters, or the time period, or the plot that came from somewhere I don’t know where? Yes, full-blown self flagellation.

Because I can’t not be writing, and I’m too uncertain to go through the pain of another first draft right away (although I’ve made a start on what may be my next WIP), I sometimes go back to manuscripts that have not gone anywhere, but that I still feel have some merit. So I dug out the first part of a trilogy I wrote ten years ago, and that is the book of my heart in many ways. It takes place during the death throes of a magnificent culture that was ground to dust by political ambitions and religious zeal. There are knights, and troubadours, and heretics, and monks. But most of all, for me, trobairitz.

Ah yes, and therein lies one of the reasons it never went anywhere. Too obscure.

I said “one of the reasons.” When I picked it up and imagined I was going to submit it, I realized that something else was wrong with it. To put it plainly, the writing wasn’t great. It wasn’t tight enough, compelling enough, and it was…wordy. There. I said it out loud.

I think that was the moment I realized that I’m a different writer now. I hope that means I’m a better one. I think it does. See? Self-doubt.

And being that person whose drive to write is as powerful as needing to scratch a deep, unscratchable itch, I started tinkering. I’ve cut nearly 10,000 words and counting. And I’m going straight through it for the second time. So many darlings, passages I labored over way back when, are gone. It’s better. Stronger. More compelling.

But… Who will ever care aside from me? I guess that’s what “write for yourself” truly means. There is absolutely no guarantee that I’ll do anything with this trilogy other than edit it and edit it until it’s something I think people might like to read, if ever it saw the light of day.