Interview with Michelle Cameron, author of BEYOND THE GHETTO GATES

Michelle Cameron and I have been comrades in historical-fiction arms since she published her first book The Fruit of Her Hands. I went to a few of her book events in New York and we cheered each other on as we struggled to break out. We’ve both found our different ways back to publishing and managed to bring out books that are near and dear to our hearts.

Michelle talked to me about her new book, Beyond the Ghetto Gates that explores a fascinating, little-appreciated period in Napoleonic history. It’s the kind of thing historical fiction does best, after all!

What drew you to this particular topic and time period?

After finishing The Fruit of Her Hands, which took place during the medieval period when antisemitism was on the rise and the Jews of Europe were subject to great brutality, I was searching for that rare moment of joy in Jewish history. They’re not easy to find! I discovered this particular episode when reading Michael Goldfarb’s Emancipation: How Liberating Europe’s Jews from the Ghetto Led to Revolution and Renaissance. In it, he depicts Napoleon discovering the ghetto of Ancona and sending his Jewish soldiers to demolish the gates. That scene was irresistible to me.

In fact, after reading Goldfarb’s book, I was set on writing a trilogy, with Book One about the Jews gaining emancipation during the French Revolution—becoming citizens for the first time in millennia, with all the duties and protections that citizenry endowed them with. Unfortunately, while I found the subject fascinating, I could never quite find the right story with which to frame it. So after actually writing that entire novel, I shelved it and moved on to Book Two—which became Beyond the Ghetto Gates. One benefit of doing this was that I knew Christophe and Daniel’s backstories intimately. But it is probably not an approach I would recommend!

Your previous novel (fabulous) The Fruit of Her Hands, also dealt with Jewish themes in history. How was working on Beyond the Ghetto Gates different and/or the same?

In The Fruit of Her Hands, I was telling a family story—from the distance of several centuries. My mother always said we could trace our roots back to the middle ages. Despite thinking for years that she was exaggerating, it turns out she was right. I always felt particularly close to Shira, who, while fictional, represented the woman who actually was my rabbi ancestor’s wife. Telling your family’s story gives you a kind of permission I didn’t have with the current novel. I had no connections with Italian Jewry and had never even heard of the harbor city of Ancona before deciding to place my novel there. (I still haven’t been.)

On the other hand, I knew more about this period than I did the middle ages. I am an inveterate re-reader of Jane Austen and Georgette Heyer, and it was easier for me to convey the time period, since I’ve always been steeped in it.

The books do share some themes in common—particularly the issue of antisemitism. While I touched—very briefly—on the notion that getting to know someone outside your own religion might lead to better understanding in The Fruit of Her Hands, it was a theme I developed much further in Beyond the Ghetto Gates. And, of course, both novels had a strong female character who wanted more than society was willing to give them.

The clash of religions and love is a fraught topic. Did you have any trepidation over writing about it?

Of course! But that clash goes to the heart of my theme of assimilation – the tug of war between wanting to preserve religious tradition and wanting to be accepted into a larger society. Loving someone who does not share your religion is a subject touched upon in several notable examples in literature—in Ivanhoe, for instance, or the Merchant of Venice, George Eliot’s Daniel Deronda, and in Fiddler on the Roof. And it is something I’ve experienced first-hand. My mother really did contemplate (briefly!) sitting shiva for my older sister when she eloped with a lapsed Catholic, because Jewish tradition dictated that she should be mourned as if dead. I actualized that scene and brought it into this novel.

It was fascinating to take advantage of the idea of intermarriage during the period of the French Revolution. Because they threw out religion entirely—until Napoleon restored it so he could be crowned by the Pope—all marriage rites were, of necessity, civil ceremonies. This was the first time that you could, with impunity, marry outside your faith. Until that time (and afterward), one of the couple would have to convert, since marriages were only conducted according to religious ritual. Of course, it was almost always the Jewish partner who surrendered their faith. But during this particular moment in history, Mirelle and her Catholic lover, Christophe, actually could be wed.

The Napoleonic Code was a mixed bag, especially for women. Could you elaborate on how Napoleon’s influence as a conqueror changed things for women in Italy?

I don’t think it changed anything at all, in fact. Napoleon held a strictly traditional view toward women, namely, that they were inferior to men and should stick to the domestic side of things. His attitude toward Madame de Staël, the outspoken author, is emblematic of how he approached any woman who stepped outside what he considered her natural sphere – he castigated and eventually banished her from France.

But the question is fascinating, Susanne, when I consider how Napoleon reacted toward women in the novel itself. Had he been aware of Mirelle’s ambitions to take over the management of her father’s workshop, for instance, he almost undoubtedly would not have approved. He was furious when Francesca refused to bow to his authority and tell him about the Madonna, and used her marriage vows as a pretext to force her. And when his beloved wife, Josephine, questioned him why he was so obsessed with the miracle portrait of the Madonna, he immediately tried to shut her down by pointing fingers at her own superstitions. But Josephine at least knew how to play him – she always did – so he finally did admit to her why the portrait had upset him so much.

If you could leave readers with one message after reading your book, what would it be?

My hope is that the book is indeed – I’m quoting Michael Goldfarb here, who was kind enough to endorse the novel – “a historical novel with deep contemporary relevance.” I would like to promote greater understanding of how deep-rooted prejudice stains our relationships with one another. In truth, I’m frightened by the current recurrence of antisemitism in the US and Europe. We’ve seen how, unchecked, these ancient biases can lead to great harm and even to death. And as I write these words, I know many people will think I’m overstating the danger. I only wish I were.

Can my novel turn that tide? Of course not. But can it influence one or two readers to become like Francesca, who had to rethink the vile things priests and her husband were telling her about the Jews when she became acquainted with one? That’s a pretty grandiose ambition, I admit. Yet it is one that would mean the world to me.

Thank you, Michelle! You’ll find Michelle’s book in bookstores everywhere. If you want to support your local bookstore by ordering online, you can get it at Bookshop.org!

END_OF_DOCUMENT_TOKEN_TO_BE_REPLACED

On Re-Discovering A Room of One’s Own

There it was. A lovely, brand new edition, lying on the shelf of the first bookshop I’d been able to browse since the beginning of the pandemic. I’d just ambled up from an outdoor brunch, iPad in tow to do a little writing, reveling in the glorious early fall day and...

END_OF_DOCUMENT_TOKEN_TO_BE_REPLACED 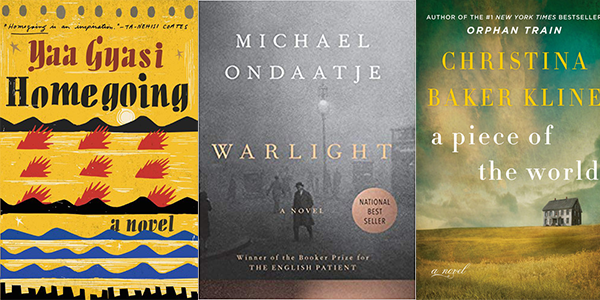 Yes, that's right. Books. Because, you know, reading one book at a time just isn't cutting it these days. I need books to make me think, to read before bed (so short snippets at a time because...sleep), research books, craft books. You get the picture. A good book is...